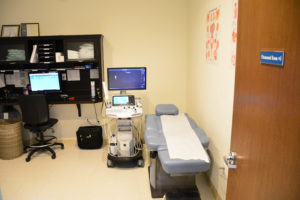 What is General Ultrasound Imaging?

Ultrasound is safe and painless, and produces pictures of the inside of the body using sound waves. Ultrasound imaging, also called ultrasound scanning or sonography, involves the use of a small transducer (probe) and ultrasound gel placed directly on the skin. High-frequency sound waves are transmitted from the probe through the gel into the body. The transducer collects the sounds that bounce back and a computer then uses those sound waves to create an image. Ultrasound examinations do not use ionizing radiation (as used in x-rays), thus there is no radiation exposure to the patient. Because ultrasound images are captured in real-time, they can show the structure and movement of the body's internal organs, as well as blood flowing through blood vessels.

Conventional ultrasound displays the images in thin, flat sections of the body. Advancements in ultrasound technology include three-dimensional (3-D) ultrasound that formats the sound wave data into 3-D images.

Doppler ultrasound, also called color Doppler ultrasonography, is a special ultrasound technique that allows the physician to see and evaluate blood flow through arteries and veins in the abdomen, arms, legs, neck and/or brain (in infants and children) or within various body organs such as the liver or kidneys.

There are three types of Doppler ultrasound:

What are some common uses of the procedure?

Ultrasound examinations can help to diagnose a variety of conditions and to assess organ damage following illness.

Ultrasound is used to help physicians evaluate symptoms such as:

Ultrasound is a useful way of examining many of the body's internal organs, including but not limited to the:

Ultrasound is also used to:

Doppler ultrasound images can help the physician to see and evaluate:

With knowledge about the speed and volume of blood flow gained from a Doppler ultrasound image, the physician can often determine whether a patient is a good candidate for a procedure like angioplasty.

How should I prepare?

You should wear comfortable, loose-fitting clothing for your ultrasound exam. You may need to remove all clothing and jewelry in the area to be examined.

You may be asked to wear a gown during the procedure.

Preparation for the procedure will depend on the type of examination you will have. For some scans your doctor may instruct you not to eat or drink for as many as 12 hours before your appointment. For others you may be asked to drink up to six glasses of water two hours prior to your exam and avoid urinating so that your bladder is full when the scan begins.

Ultrasound scanners consist of a console containing a computer and electronics, a video display screen and a transducer that is used to do the scanning. The transducer is a small hand-held device that resembles a microphone, attached to the scanner by a cord. Some exams may use different transducers (with different capabilities) during a single exam. The transducer sends out high-frequency sound waves (that the human ear cannot hear) into the body and then listens for the returning echoes from the tissues in the body. The principles are similar to sonar used by boats and submarines.

The ultrasound image is immediately visible on a video display screen that looks like a computer or television monitor. The image is created based on the amplitude (loudness), frequency (pitch) and time it takes for the ultrasound signal to return from the area within the patient that is being examined to the transducer (the device placed on the patient's skin to send and receive the returning sound waves), as well as the type of body structure and composition of body tissue through which the sound travels. A small amount of gel is put on the skin to allow the sound waves to travel from the transducer to the examined area within the body and then back again. Ultrasound is an excellent modality for some areas of the body while other areas, especially air-filled lungs, are poorly suited for ultrasound.

How does the procedure work?

Ultrasound imaging is based on the same principles involved in the sonar used by bats, ships and fishermen. When a sound wave strikes an object, it bounces back, or echoes. By measuring these echo waves, it is possible to determine how far away the object is as well as the object's size, shape and consistency (whether the object is solid or filled with fluid).

In medicine, ultrasound is used to detect changes in appearance, size or contour of organs, tissues, and vessels or to detect abnormal masses, such as tumors.

In an ultrasound examination, a transducer both sends the sound waves into the body and receives the echoing waves. When the transducer is pressed against the skin, it directs small pulses of inaudible, high-frequency sound waves into the body. As the sound waves bounce off internal organs, fluids and tissues, the sensitive receiver in the transducer records tiny changes in the sound's pitch and direction. These signature waves are instantly measured and displayed by a computer, which in turn creates a real-time picture on the monitor. One or more frames of the moving pictures are typically captured as still images. Short video loops of the images may also be saved.

Doppler ultrasound, a special application of ultrasound, measures the direction and speed of blood cells as they move through vessels. The movement of blood cells causes a change in pitch of the reflected sound waves (called the Doppler effect). A computer collects and processes the sounds and creates graphs or color pictures that represent the flow of blood through the blood vessels.

How is the procedure performed?

For most ultrasound exams, you will be positioned lying face-up on an examination table that can be tilted or moved. Patients may be turned to either side to improve the quality of the images.

After you are positioned on the examination table, the radiologist (a physician specifically trained to supervise and interpret radiology examinations) or sonographer will apply a warm water-based gel to the area of the body being studied. The gel will help the transducer make secure contact with the body and eliminate air pockets between the transducer and the skin that can block the sound waves from passing into your body. The transducer is placed on the body and moved back and forth over the area of interest until the desired images are captured.

There is usually no discomfort from pressure as the transducer is pressed against the area being examined. However, if scanning is performed over an area of tenderness, you may feel pressure or minor pain from the transducer.

Rarely, young children may need to be sedated in order to hold still for the procedure. Parents should ask about this beforehand and be made aware of food and drink restrictions that may be needed prior to sedation.

Once the imaging is complete, the clear ultrasound gel will be wiped off your skin. Any portions that are not wiped off will dry quickly. The ultrasound gel does not usually stain or discolor clothing.

In some ultrasound studies, the transducer is attached to a probe and inserted into a natural opening in the body. These exams include:

What will I experience during and after the procedure?

Ultrasound examinations are painless and easily tolerated by most patients.

Ultrasound exams in which the transducer is inserted into an opening of the body may produce minimal discomfort.

If a Doppler ultrasound study is performed, you may actually hear pulse-like sounds that change in pitch as the blood flow is monitored and measured.

Most ultrasound examinations are completed within 30 minutes, although more extensive exams may take up to an hour.

When the examination is complete, you may be asked to dress and wait while the ultrasound images are reviewed.

After an ultrasound examination, you should be able to resume your normal activities immediately.

Who interprets the results and how do I get them?

A radiologist, a physician specifically trained to supervise and interpret radiology examinations, will analyze the images and send a signed report to your primary care physician, or to the physician or other healthcare provider who requested the exam. Usually, the referring physician or health care provider will share the results with you. In some cases, the radiologist may discuss results with you at the conclusion of your examination.

What are the benefits vs. risks?

What are the limitations of General Ultrasound Imaging?

Ultrasound waves are disrupted by air or gas; therefore ultrasound is not an ideal imaging technique for air-filled bowel or organs obscured by the bowel. In most cases, barium exams, CT scanning, and MRI are the methods of choice in such a setting.

Large patients are more difficult to image by ultrasound because greater amounts of tissue attenuate (weaken) the sound waves as they pass deeper into the body and need to be returned to the transducer for analysis.

Ultrasound has difficulty penetrating bone and, therefore, can only see the outer surface of bony structures and not what lies within (except in infants who have more cartilage in their skeletons than older children or adults). For visualizing internal structure of bones or certain joints, other imaging modalities such as MRI are typically used.