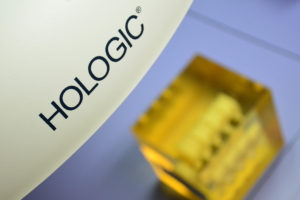 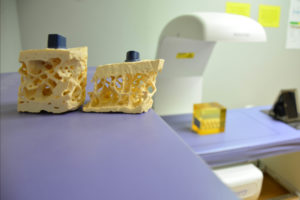 What is a Bone Density Scan (DEXA,DXA)?

An x-ray (radiograph) is a noninvasive medical test that helps physicians diagnose and treat medical conditions. Imaging with x-rays involves exposing a part of the body to a small dose of ionizing radiation to produce pictures of the inside of the body. X-rays are the oldest and most frequently used form of medical imaging.

DXA is most often performed on the lower spine and hips. In children and some adults, the whole body is sometimes scanned. Peripheral devices that use x-ray or ultrasound are sometimes used to screen for low bone mass, mostly at the forearm. In some communities, a CT scan with special software can also be used to diagnose or monitor low bone mass (QCT). This is accurate but less commonly used than DXA scanning.

What are some common uses of the procedure?

DXA is most often used to diagnose osteoporosis, a condition that often affects women after menopause but may also be found in men and rarely in children. Osteoporosis involves a gradual loss of bone, as well as structural changes, causing the bones to become thinner, more fragile and more likely to break.

DXA is also effective in tracking the effects of treatment for osteoporosis and other conditions that cause bone loss.

The DXA test can also assess an individual's risk for developing fractures. The risk of fracture is affected by age, body weight, history of prior fracture, family history of osteoporotic fractures and life style issues such as cigarette smoking and excessive alcohol consumption. These factors are taken into consideration when deciding if a patient needs therapy.

Bone density testing is strongly recommended if you:

The Vertebral Fracture Assessment (VFA), a low-dose x-ray examination of the spine to screen for vertebral fractures that is performed on the DXA machine, may be recommended for older patients, especially if:

How should I prepare?

On the day of the exam you may eat normally. You should not take calcium supplements for at least 24 hours before your exam.

You should wear loose, comfortable clothing, avoiding garments that have zippers, belts or buttons made of metal. Objects such as keys or wallets that would be in the area being scanned should be removed.

You will be asked to remove some of your clothes and to wear a gown during the exam. You may also be asked to remove jewelry, removable dental appliances, eye-glasses and any metal objects or clothing that might interfere with the x-ray images.

Inform your physician if you recently had a barium examination or have been injected with a contrast material for a computed tomography (CT) scan or radioisotope scan. You may have to wait 10 to 14 days before undergoing a DXA test.

Women should always inform their physician and x-ray technologist if there is any possibility that they are pregnant. Many imaging tests are not performed during pregnancy so as not to expose the fetus to radiation. If an x-ray is necessary, precautions will be taken to minimize radiation exposure to the baby.

There are two types of DXA equipment: a central device and a peripheral device.

Most of the devices used for DXA are central devices, which are used to measure bone density in the hip and spine. They are usually located in hospitals and medical offices. Central devices have a large, flat table and an "arm" suspended overhead.

Peripheral devices measure bone density in the wrist, heel or finger and are often available in drugstores and on mobile health vans in the community. The pDXA devices are smaller than the central DXA devices, weighing only about 60 pounds. They may have a portable box-like structure with a space for the foot or forearm to be placed for imaging. Other portable technologies such as specially designed ultrasound machines, are also sometimes used for screening. However, central DXA is the standard technique.

How does the procedure work?

The DXA machine sends a thin, invisible beam of low-dose x-rays with two distinct energy peaks through the bones being examined. One peak is absorbed mainly by soft tissue and the other by bone. The soft tissue amount can be subtracted from the total and what remains is a patient's bone mineral density.

How is the procedure performed?

This examination is usually done on an outpatient basis.

In the central DXA examination, which measures bone density of the hip and spine, the patient lies on a padded table. An x-ray generator is located below the patient and an imaging device, or detector, is positioned above.

To assess the spine, the patient's legs are supported on a padded box to flatten the pelvis and lower (lumbar) spine. To assess the hip, the patient's foot is placed in a brace that rotates the hip inward. In both cases, the detector is slowly passed over the area, generating images on a computer monitor.

You must hold very still and may be asked to keep from breathing for a few seconds while the x-ray picture is taken to reduce the possibility of a blurred image. The technologist will walk behind a wall or into the next room to activate the x-ray machine.

The peripheral tests are simpler. The finger, hand, forearm or foot is placed in a small device that obtains a bone density reading within a few minutes.

An additional procedure called Vertebral Fracture Assessment (VFA) is now being done at many centers. VFA is a low-dose x-ray examination of the spine to screen for vertebral fractures that is performed on the DXA machine.

The VFA test adds only a few minutes to the DXA procedure.

The DXA bone density test is usually completed within 10 to 30 minutes, depending on the equipment used and the parts of the body being examined.

You will probably be asked to fill out a questionnaire that will help the doctor determine if you have medical conditions or take certain medications that either increase or decrease your risk of a fracture. The World Health Organization has recently released an online survey that combines the DXA results and a few basic questions and can be used to predict 10-year risk of hip fracture or other major osteoporotic fractures for post-menopausal women.

What will I experience during and after the procedure?

Bone density tests are a quick and painless procedure.

Routine evaluations every two years may be needed to see a significant change in bone mineral density, decrease or increase. Few patients, such as patients on high dose steroid medication, may need follow-up at six months.

Who interprets the results and how will I get them?

A radiologist, a physician specifically trained to supervise and interpret radiology examinations, will analyze the images and send a signed report to your primary care or referring physician, who will discuss the results with you.

DXA scans are also interpreted by other physicians such as rheumatologists and endocrinologists. A clinician should review your DXA scan while assessing the presence of clinical risk factors such as:

Your test results will be in the form of two scores:

T score — This number shows the amount of bone you have compared with a young adult of the same gender with peak bone mass. A score of -1 and above is considered normal. A score between -1.1 and -2.4 is classified as osteopenia (low bone mass). A score of -2.5 and below is defined as osteoporosis. The T score is used to estimate your risk of developing a fracture and also to determine if treatment is required.

Z score — This number reflects the amount of bone you have compared with other people in your age group and of the same size and gender. If this score is unusually high or low, it may indicate a need for further medical tests.

Small changes may normally be observed between scans due to differences in positioning and usually are not significant.

What are the benefits vs. risks?

A Word About Minimizing Radiation Exposure

Special care is taken during x-ray examinations to use the lowest radiation dose possible while producing the best images for evaluation. National and international radiology protection organizations continually review and update the technique standards used by radiology professionals.

Modern x-ray systems have very controlled x-ray beams and dose control methods to minimize stray (scatter) radiation. This ensures that those parts of a patient's body not being imaged receive minimal radiation exposure.